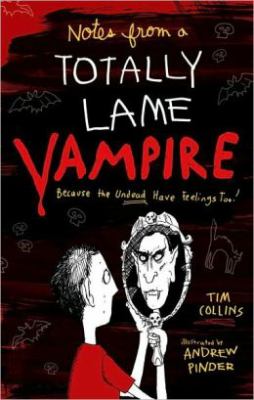 Notes From a Totally Lame Vampire by Tim Collins

If you’re a fan of Diary of a Wimpy Kid, then you’re in luck there’s another great series out like it, Notes From a Totally Lame Vampire by Tim Collins. Nigel, is the totally lame vampire, and like Diary of Wimpy Kid, this book is journal and is complete with pictures and some pretty terrible poems too. The big difference between Nigel and Greg Heffley is that Nigel is a vampire, and while he’s stuck living as a teen he’s really been around for 100 years. Now most people think being a vampire involves super human strength, being speedy, picking up the ladies with your irresistible looks, and more, but if you’re completely lame like Nigel, it means being pimply, angsty, awkward, wussy, and not so smooth with the ladies. Nigel vents about his frustration about lacking all the typical vampire skills and also the trials of dealing with school and his oh-so-embarrassing family. Filled with humorous reflections on living as a teen for 100 years, the social pains of school, wooing his new classmate Chloe, and some great twists Notes From a Totally Lame Vampire is a great quick and laugh out loud read.