Funny Girl is a LOL-worthy collection of short stories by some of your favorite lady authors, arranged for your enjoyment by Betsy Bird. Think of it as a smorgasbord of scrumptious literary offerings by Raina Telgemeier, Shannon Hale, and other gals who are guaranteed to make you laugh. The great thing about this short story collection is that it has something for everyone. Looking for an essay on a germaphobic mother? Check out “One Hot Mess” by Carmen Agra Deedy. A goofy graphic short? Cece Bell has just the fix with “A Most Serious Recitation of the Poem ‘Trees.’” All of the pieces pack a punch to pique the reader’s interest while moving quickly so as not to lose it. Funny Girl is perfect for reluctant readers (or readers with a short attention span) and those who are already fans of the featured authors in the collection.

If you liked Funny Girl, then you’ll love Real Friends by Shannon Hale, Hamster Princess: Harriet the Invincible by Ursula Vernon, and Sisters by Raina Telgemeier.

Reviewed by Anique A.

They’re green, they’re sinister… and they’re underwear! Jasper Rabbit discovers the unspeakable horror of unmentionables in “Creepy Pair of Underwear!” by Aaron Reynolds. Devoted readers may remember Jasper Rabbit from his first book “Creepy Carrots!” in which Jasper encounters villainous vegetables. In his latest epic, Jasper is making a big-boy purchase of underwear with his mom when he finds the very cool, very creepy titular underwear. Jasper brings home a pair of the Frankenstein’s monster-inspired briefs only to discover a terrifying truth about them that is only revealed at night. Parents and caregivers will enjoy making the journey with Jasper as he searches for a solution to his underpants problem, and kids will love giggling at the juxtaposition between fear and underwear, the silliest thing they can imagine.

If you liked “Creepy Pair of Underwear!” then you’ll love the aforementioned “Creepy Carrots!” as well as “I Am (Not) Scared” by Anna Kang and “The Dead Family Diaz” by P.J. Bracegirdle.

Reviewed by Anique A. 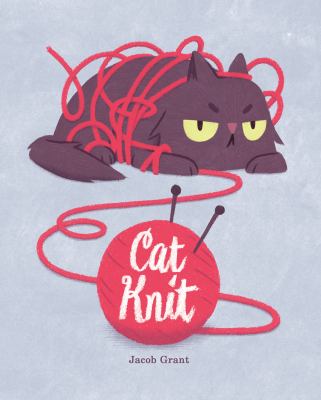 Cat Knit by Jacob Grant is tale of friendship, love, loss, betrayal. and understanding– all told from the perspective of the cat aptly named “Cat.” Cat’s best friend is cozy Yarn, until Yarn is suddenly transformed into an unfamiliar foe. In the tradition of Harry the Dirty Dog in the story No Roses for Harry!, Cat does not appreciate the unwanted gift of an itchy sweater (once Cat’s friend Yarn). However, Cat, also like Harry, discovers that a previously hated gift can turn into something better than expected. The simple textual narrative of Cat Knit is carried by the bright and expressive illustrations of Cat. His big, green eyes say more to the reader than any dialogue could. This silly story is fun for both children and parents alike.

Are you a young princess with ambitions to become a fierce warrior? If so, you’re in for a treat because Kate Beaton has comically captured such a struggle in her children’s book The Princess and the Pony. Adult readers may be familiar with Kate Beaton’s distinctly quirky drawing style and sense of humor from her webcomic series Hark! A Vagrant. Beaton adapted one of her original characters, a dumpy pony, to delight a younger audience as well.

Princess Pinecone is the protagonist of our story. She is the youngest warrior in a kingdom of warriors and is desperate to prove her fortitude in battle (though battling in Princess Pinecone’s kingdom seems to consist mostly of spitballs and general scuffles). All Princess Pinecone really needs to succeed in battle is a horse—one big, strong, and ready to charge! As her birthday approaches, the princess figures that this birthday will be the one where she finally gets a horse instead of yet another cozy sweater.

Instead of the stallion she so desires, Princess Pinecone receives a pony. Not just any pony—one decidedly stout, stumpy, and above all, adorable! How can Princess Pinecone strike fear in the hearts of the other warriors with such a pony? Still, the princess graciously accepts her gift (even though his eyes point in different directions!) and tries to make the best of the situation. Pinecone tries to train her pony for battle, but it proves difficult to try and turn a chubby pony into a fierce warhorse.

When the day of the battle finally arrives, Pinecone and her pony enter into battle– and surprise everyone with a secret weapon. Goofy illustrations will make younger readers giggle while adults will enjoy the nonsensical, deadpan humor.

If you liked The Princess and the Pony, look for Kate Beaton’s latest children’s book, King Baby!

Reviewed by: Anique A.

The Crossover by Kwame Alexander is a book popping up on a lot of different school summer reading lists. For some students, reading is the last thing they want to do when school is out. It can be hard to get your student to read when the nice weather is calling their name. We get it. However, if you’re given a choice on which books to read, this is a great one for students who don’t like to read.

This book is unlike any book I’ve read before. Written completely in verse, there are no more than 50 words on a page. So, just by looking at the pages it doesn’t seem all that bad. It’s a super quick read and the subject matter is very tangible and realistic.

We’re following a pair of twins who are obsessed with basketball, and sometimes girls. Sometimes things are great – you’re winning all your games and you’re getting A’s in all your classes. However, there’s always those times when you’re mom starts making weird dips trying to get you healthy, you’re fighting with a best friend, or your mind just isn’t in the game.

If you like this book, you’ll enjoy Kwame Alexander’s other book Booked, Planet Middle School by Nikki Grimes, and Rocket Man by Jan Coates.